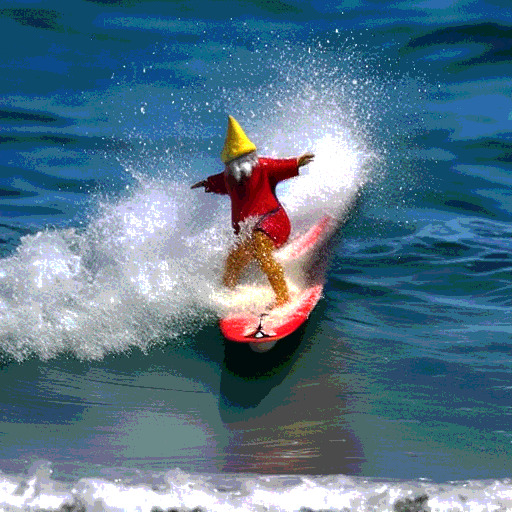 Sandy is a great admirer of Merwin and the ways of Merwin, so much so that Sandy has abandoned the Water Clan entirely. She has left Scarcity with a small group of followers in search of Merwin. They travel in the old Polynesian style, with a surf board and a paddle. Their group, in their faith in Merwin, have become somewhat religious in their following of his perceived beliefs. The water was always important to this group of Gnomes as they were all a part of the Water Clan, but now the vast oceans feel more spiritual. Merwin, their God of the oceans, has somehow mastered the largest waves and braved the strongest currents. His legend is slowly doing what legends do, they turn into mythology.

Local Gnomes Only is their mantra. Their tight group of 5 has made them weary of outsiders and anyone who doesn’t surf is immediately under suspicion. This is likely left over paranoia from being at war for so long in Scarcity, but they’ve renounced the war and all who are involved. It’s all about finding the sweetest wave to ride now. Especially since they have finally found a new home in Seoul. And they’ve started their own business selling surf boards and giving lessons to local children. However, only they are allowed to surf the beach in their back yard. Local Gnomes only, after all.

Sandy maybe their leader, but their true faith is in Merwin. The rest of the crew is as follows; Gilbert is their business man and keeps track of the accounts. Samish is their surf board builder. Petra is their architect/ inventor. Finally there’s Pip who is their surf instructor and de facto public relations person since he is the least weary of strangers. The war has left them all very skilled warriors, but has also given them all some level of G-PTSD. However, their newly found home along with their spiritual beliefs have helped them come a long way from home and the wars of their kin.